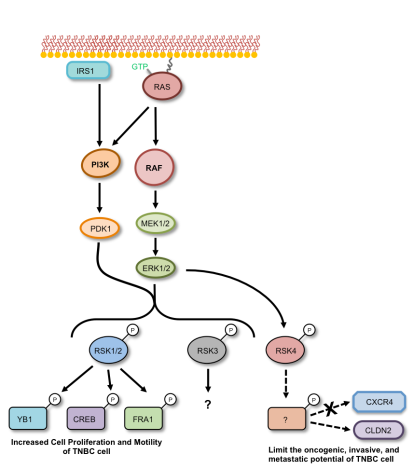 p90 ribosomal S6 kinases (RSKs) is a group of highly conserved Ser/Thr kinases that promotes cell proliferation, growth, motility and survival. In humans four different isoforms (RSK1, RSK2, RSK3, and RSK4) have been identified, with a shared sequence similarity of 73 – 80 %. RSKs are monomeric proteins composed by two kinase domains: a C-terminal kinase domain (CTKD) and an N-terminal kinase domain (NTKD) connected by a linker region. The two kinase domains did not develop by gene duplication but by gene fusion: the NTKD belongs to the protein kinase AGC family, whereas the CTKD belongs to the Ca2+/calmodulin-dependant protein kinase family (CAMKII family). RSKs loss of regulation has been linked to cancer, but our understanding of RSK function in disease progression is incomplete and is complicated by the fact that RSK isoforms play different roles in different cancer types.

The heterogeneous nuclear ribonucleoprotein (hnRNP) A1 protein holds promises as a novel Small Cell Lung Cancer (SCLC) therapeutic target. hnRNPA1 is a major regulator of gene expression, and misregulation is often associated with cancer. Specifically in SCLC, it has been shown that, downstream of FGF2 signalling, a multi-protein complex involving PKCε, B-Raf and S6K2 is formed in a MEK-dependent fashion. This results in S6K2 activation leading to hnRNPA1 phosphorylation on Ser 4 and Ser 6. This event confers hnRNPA1 the ability to specifically bind the XIAP and Bcl-xL mRNAs. hnRNPA1 mediates nuclear export of these mRNAs and promotes their translation into proteins, leading to downregulation of apoptosis and promotion of cell survival, which unavoidably leads to chemoresistance.

We carried out a fragment-based screening on hnRNPA1 using a novel technology, Fragment Screening – XChem. Building on these data, we have recently started a drug development project in collaboration with Apollo Therapeutics.

In plants, like in most eukaryotes, the p70 ribosomal S6 kinases (S6Ks) pathway coordinates cell growth, cell proliferation, and stress response via modulating protein synthesis and ribosomal biogenesis. Studies in Arabidopsis thaliana (Arabidopsis) have shown that, similarly to in humans, the S6K family is composed of two members, called AtS6K1 and AtS6K2. Initial evidences suggest that AtS6K2 regulates responses to stresses and developmental cues. In fact, AtS6K2 is up regulated in response to cold and high-salinity stress and is co-expressed with genes involved in stress responsive regulation of plant growth. Furthermore, AtS6K2 plays an important role in chromosome stability and functions as a repressor of cell proliferation. In the context of future climate change predictions, we aim to understand how S6K2 modulates cellular responses to changes in the external environment in the model plant Arabidopsis. As such, our aim is to define how AtS6K2 allows plant cells to adapt to different environmental conditions. Plants are ideal to characterise S6K2 specific pathways, since our studies suggest that plant S6Ks represents the prototypical ribosomal kinase family. Plants have a much-reduced complexity since they do not have RSKs. In fact, humans have two homologues ribosomal protein kinase families: the p70 ribosomal S6 kinases (composed of two members, S6K1-2) and the p90 ribosomal S6 kinases (composed of four members, RSK1-4).